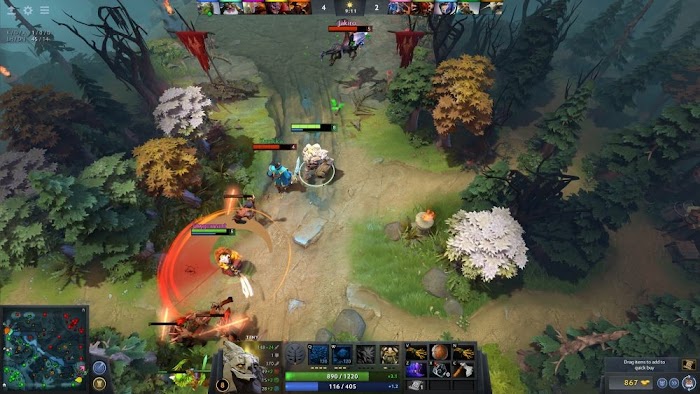 Games
MOBA,online battle multiplayer arena is a genre of game that has been loved since 15 years ago. Not only testing the agility of playing alone, the players are also required to understand the situation, the strengths and weaknesses of character, to teamwork.

Many game titles that carry this genre. Here is a row of the best MOBA games, besides Mobile Legends: Bang Bang, judging by its popularity and gameplay .

1. Heroes of the Storm

HotS is a MOBA game created by Blizzard Entertainment. HotS presents Blizzard's original characters from various titles, such as Tracer from the Overwatch series, Blaze from StarCraft, Leoric from Diablo, Illidan from Warcraft and others.

One game that is still loved today. Dota 2 has been present since 2013 and until now is considered as one of the best MOBA games. Evidenced by the audience on Twitch who are still large.

Rivals from Dota 2. The number of players and connoisseurs of LoL is very much. Even the World Cup tournament tickets are almost always sold out. LoL is still developing the game. The latest news LoL will go into the mobile console .

Smite provides an alternative MOBA game. Not only can be played on a PC, this MOBA game allows it to be played on Xbox One to PlayStation 4. The story itself revolves around world mythology that blends Chinese, Egyptian, Greek and other cultures.

Entering the mobile world , Vainglory is one of the MOBA titles to be reckoned with. The game is no less good with MOBA games on PC and the graphics are also good. There are four PVP modes that can be played.

A name that may be familiar in Indonesia. AoV, which is also present on the Nintendo Switch, is adapting many characters from Asian culture. Interestingly the international community adores music in the game.

Good game, but unfortunately less exposed. Battlerite is staying by people as the successor to Bloodline Champions. The MOBA system is different from other games. There are no towers , no minions to kill. Purely a 2vs2 or 3vs3 character fight.

Created on the basis of the game Defense of the Ancients, HoN has a system similar to Dota in the form of chat sounds in the game as well as the statistics of each player.

This game is made by the same video game developer studio , namely S2 Games. Because it was only released in 2015, this game is very suitable for beginners because there have not been many updates and there are not many high level players.

Awesomenauts was created specifically for the PlayStation 3 and Xbox 360 consoles in 2012, but continues to get developments until now it can be played on PS4, Xbox One, and PC. This MOBA game uses a 2D platform system that makes you feel like playing Megaman.

The MOBA game will likely continue to develop for the next five years. There will certainly be a new type of MOBA that you can play. But what will the game look like? That's what is unknown. Here are 10 List of the Best MOBA Games You Can Play Right Now