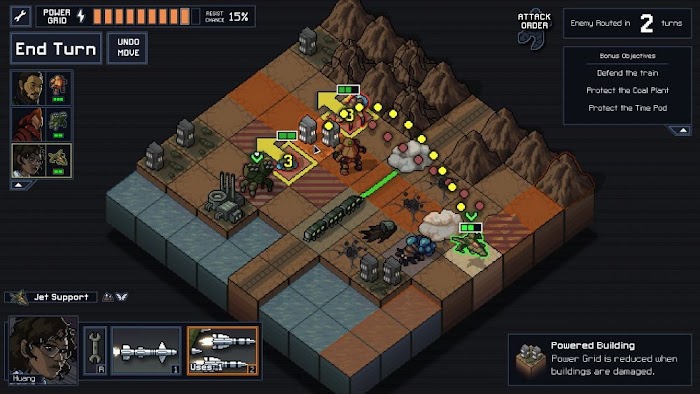 Games
Besides PCs, laptops are also one of the devices used by gamers to play games. However, not everyone has a laptop with a rig or great specifications. Most only have laptops with modest specifications.
Fortunately, the limitations of 'improvised' is helped by the presence of lightweight games that are low-spec or do not need high specifications. Here has summarized 7 of them, which you can play comfortably without having to think about specifications.
1. Into The Breach
The first is Into The Breach, a phenomenal indie turn-based strategy game from the creators of FTL. So phenomenal, Into The Breach has even become one of the favorite indie games on several gaming sites such as PC Gamer, IGN and also Gamespot.
What makes Into The Breach extraordinary is the fact that its replayability is high enough, so that players can play it repeatedly with different squad and tactics without feeling bored at all. Plus, it has a small size, simple visuals and of course, friendly for 'potato' laptops.
2. Celeste
The favorite indie platformer game for many people in recent years, Celeste combines good control, an engaging soundtrack and an amazing story. Celeste also has preoccupations like Super Meat Boy, where challenge after challenge is spread on each level.
So just like most platformer games , Celeste is perfect when played with a mouse and keyboard . Even so, Celeste is also equipped with support to be played with a controller, such as Dualshock 4 or Xbox One Controller.
3. West of Loathing
West of Loathing has been named one of the most ridiculous games in 2017 by several gaming sites . West of Loathing is unique because despite the RPG genre, what is being offered is not a loot , but a joke.
Every world of this Asymmetric game, filled with jokes , is no exception in the options menu. In short, West Of Loathing is an unpleasant RPG game, but it is also smart with character classes such as Beanslinger and Cowpuncher. And even though the visuals are limited, the game is actually inversely proportional to the visuals.
4. Cuphead
Thanks to the 2D visual style of classic animation, Cuphead is arguably the most beautiful game that can be played on low-end laptops . Cuphead carries standard gameplay mechanisms like the majority of platformer games , but with non-standard difficulty levels.
Even so, Cuphead can still be conquered easily, if you already understand the pattern. If you are interested, Cuphead will invite you to adventure in a fantastic world with full of challenging bosses, while listening to the phenomenal soundtrack and unusual artistic visuals.
5. Darkest Dungeon
Darkest Dungeon is a thrilling strategy game with gothic- style visuals Lovecraft, brilliant narration and also quite scary quests or missions. Darkest Dungeon creates a constant tension, even though horror is clearly not a genre that is really carried.
The Darkest Dungeon carries what is called the Affliction System , where monsters are not the only things that will be opposing players, but also stress like paranoia and fear. This is suitable for you who want to explore a new genre, with a new feel that is more gripping.
6. Stardew Valley
Stardew Valley brings what makes Harvest Moon great - farming or farming life, to the PC. In this game, players can develop their 'vegetable kingdom', while exploring, learning the lives of other NPCs and falling in love.
The simple visuals make Stardew Valley run smoothly on a laptop with even the specifications. This game made by ConcernedApe, is also available on the Android and iOS platforms, for those of you who might be interested in enjoying it on a simpler device.
7. Heat Signature
Created by former PC Gamer editor Tom Francis, also known for his incredible Gunpoint, Heat Signature is a game about sneaking into spaceships, using all kinds of gadgets to complete missions and deal with the chaos that ensues. Heat Signature creates creativity through great complexity like most sim games. Not only that, Heat Signature is also very smart in building procedural levels so that players become interested in playing it again and again.
Similarly, a few reviews as well as recommendations for the best game that is friendly and lightweight for potato laptops. All of the above games, you can play comfortably even though your laptop only has a dual-core processor and 2GB RAM.
Load comments
Subscribe to: Post Comments (Atom)